GOAL
Clear the 5 bandit camps and defeat the bandit boss to win the game. In order to complete a level, defeat all enemies by shooting your gun or exploding/trapping enemies.

INTERACTION
To move your character click on a highlighted tile. To shoot your gun in a specific direction click on a bullet. Reload your gun by clicking on an empty cylinder slot.

You can also use 1 of 3 skills. When active, highlighted tiles (purple) can be clicked to interact.

ENEMIES
Each enemy has its own item and can attack the player. They move in random order and will try to defeat you, even at their own demise. Take care.

SKILL DESCRIPTION
Sprint - Move to any free tile, 2 tiles away from your current position.
Punch - Push an adjacent object away from you.
Bullet Hail - Empty your gun by shooting all available bullets in a random order.

Disclaimer: This game was created in one week and will contain major bugs and issues!

Really fun, hard to remember all of the possible threats especially when TNT shoots a trap at you. All of the smaller mechanics really pulled the game together like TNT stunning some enemies and special abilities. Also, the sound effects fit the game's style very well.

Great concept and execution! The little touches with the art direction were also nice, like the ground patterns and the little animations.

because of the name of this game, i keep thinking about the acclaimed Martin Scorsese movie Goncherov (1973), and the famous bit where goncherov gets gunched

I already finished the 8-bit version of Guncho on NG so this was my second playthroug.
It was as fun the second time.
Amazing game <3.

Reply
HurricaneOf8739 days ago
Included Guncho at 23:52. A handful of playthroughs included, earning on the fly.
Reply
Tinytouchtales35 days ago

Fun and atmospheric little game, challenging enough, very impressive that you made this in a week, thank you! (found this via the link in someone’s PICO8 demake)

Logged in to say thanks for this gem. It's not long, mechanics are great, win depends on learning skills and enemy patterns and not replay count, no tries to feed a teaspoon of content for several days by setting high difficulty and giving perks one by one (this plaques all indie games now). Also, it looks like Guncho and the Villain are brothers :)

Thanks and nice lore addition!

A bandit shot an exploding barrel, killing me and another bandit, and the force of the explosion blew a bear track back to them, killing them. So everyone died. That's just a wonderful game moment right there.

Very fun, great concepts. The use of bullets as direction, and rotate each turn, and managing movement/reloading is really clever. I wasn't always sure which way the barrel was turning and why, but presumably I'll figure that out on further plays. Only bug I got was a level reloading multiple times before deciding on a layout. I got it a few times, but nothing game breaking. Amazing this was made in just a week. Kudos!

theres a bug where it wont let me shoot, even if there's someone in front of me, in a direction where the slot is loaded.

also the bullet hail doesn't work. it shoots one bullet then stops. it did this multiple times and made me restart like 5 times

Sorry, I haven't worked on this since the jam. But thanks for the report!

Nice, thanks for the video!

Incredibly fun game! One bug I encountered was that if you're in a corner with two adjacent tiles that both have dynamite, with nothing to shoot at, and a full barrel (no reloads), you can get into a state where you have no possible moves, and have to restart. Not a huge deal with how short the game is, but I thought you'd like to know.

Found a few bugs:
- If you click when its loading it will try to load multiple times.
- Occasionally a gunman will show up hovering between 2 hexagons in the bottom row
- Sometimes the bullets will unload rather than reload if you have some odd gaps and move back and forth a lot (or is that intentional?)
- Sometimes it will look like there's a bullet in the chamber but it doesn't light up and it isn't clickable.
- Sometimes multiple bullets will be gold even if there's no enemy or barrel in line.
- Especially in the 5th and 4th level (but occasionally in the 3rd), levels will spawn you in turn 1 immediate deaths. Especially if it starts you in a corner, your only options are frequently to move to 1 of 2 deadly spots (by an exploding barrel for instance), or blow your 6-direction power and then the second turn is the same or worse.

And it's not a bug, but in level 5, the boss with 2 actions, with 2 extra gunmen seems almost impossible!

Brilliant game. The subtle differences between how dynamite and bear traps interact with each element of the game delighted me!

Yes! Enyo with hex tiles! (and a bit more of course).

Thanks so much for making this, Enyo has been pretty much the only game I've been playing on Android for the past 4 years at least!

Astonishing achievement in just 7 days from both an artistic and design standpoint.

Reminiscent of Hoplite as others have mentioned, but it felt far less punitive in terms of the nigh-impossible starting positions that Hoplite gives you in later levels (we've all been isolated on a strip of land with nowhere to hide from a legion of archers and wizards).

In contrast, whenever I (frequently) died in Guncho it was because of poor decisions on my part. In other words, good job! Difficult, but fair

Please put this on mobile! I'd buy this so hard.

This is a lot of fun. The limitations around movement and the rolling barrel make for fun tactics. I was caught off guard when an enemy holding a revolver hit both me and his teammate in the radius of the explosive barrel to score a win.

such a fun game!!

found out that if after you killed every one on the first level, you reload your missing bullets it allway skips me to the last level. speedrun technique!.

Thanks and nice bug!

This is amazing. Love it.
Never got to finish the last level but still.

The sound design in this game is excellent for a game jam game. Good job!

also the trappers got me with the bear trap gun lmao

I'm enchanted by this lil game.

Awesome game, it's so much fun! Good job!!

This is really cool! Love the concept and the art. The gameplay loop is simple but not easy.
Very good job!

Solid game! I love the aesthetic and depth of strategy that is possible. <3

Man, this is harder than it looks.

This is AWESOME! Sad about the bugs, but it's understandable, it's a one week game!

-Where stuff is pushed after an explosion is kind of weird, a bit unpredictable in a way. Maybe it's because of the hexagons.

-I'd say that moved enemies should always be stunned, as having an enemy pushed towards you and you not being able to do anything but watch until it wacks you is kind of frustrating.

-Trappers should leave red "danger" ground when they are about to kick the traps towards you!

-Maybe let the player dash through traps and dynamite?

That's it! It's a fantastic game. Hope it comes to android!

Thanks for the suggestions. If we find some time we going to fix some of the more obvious issues for sure.

This is fab! I would love this as a proper Android app.

I love this! AA! I used to play hoplite a lot. Another great day for hexagonal roguelikes! The depth of the interactions was great! I love how enemies acted suicidally to kill the player. I think a fixed roulette rotation direction would be better.

Yes, it reminded me of Hoplite too! In both games you'd better watch those gunmen/archers :)

This game rocks!
It's really cool as it is, but also makes you want MORE LEVELS!

Really neat puzzle game! Love the aesthetic and the clever way of using a revolver. Keep it up! Great work!

Amazing, I wish you get excited enough to make a fully fledge game from it! Lovely character designs as well :)

Super fun! Hope it makes its way to mobile someday.

I'm playing it on Android right now in the browser, it works perfectly! 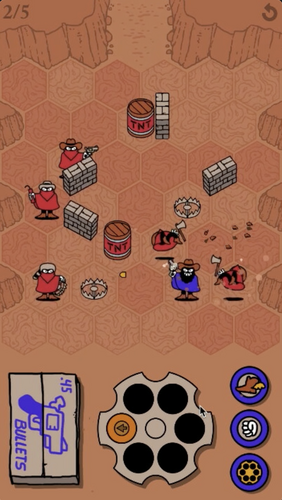 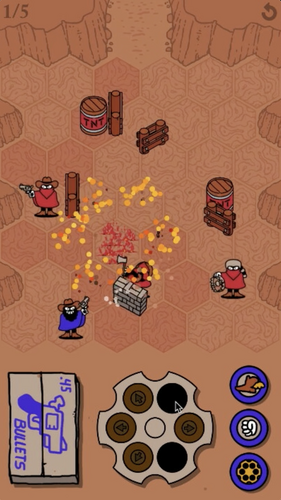 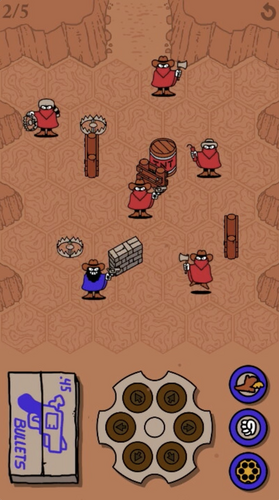