Descent in the Crypt of the Bone King to retrieve his long forgotten crown.

Find each levels exit by shifting tiles via drag & drop.  Place bone piles adjacent to the exits bone locks to full-fill its unlock requirement. Descent until you find the kings long forgotten crown.

Click & drag discovered tiles to move a whole row or column if possible.
Tap and hold an adjacent tile to move to it.
Click and hold onto an enemy to cast an active spell on it.

What spell(s) you can use is based on the row/column you character is standing in.  Spells work in a specific way where the spell that is opposite to your target direction is used first and if no direct spell is available any other active spell is used.

Ex: You attack an enemy to your left, so you will use the spell to your right. If no spell on your right is available you will use any other spell either left, above or below you.

After a spell is used its charge is empty. To recharge a spell move (slide) the game board at least once. Using spells will not advance a turn so you can chain multiple spells in one turn.

Most spells can't be cast through walls, so make sure you have a clear line of sight to your target.

Break - Destroy the next wall towards the target direction.

Bones - Create a pile of bones.

Raise - Turn a bone pile into an ally.

Poison - Poison an enemy, it receives 1 damage after 3 turns.

Teleport - Teleport an enemy on a random free tile.

Polymorph - Transform an enemy into a random new enemy.

Piercing Zap - Cast a ray that moves through 1 wall.

Shifting Zap - Cast a ray that changes its direction when it hits a wall.

Spell Morph - Transform a spell into a random new spell.

Disclaimer: This game was created in one week and will contain major bugs and issue!

Took a while to figure out, but very enjoyable.

The concept is really nice, but I can't play because the "tap and hold" controls are unresponsive 9 times out of 10. Also there really needs to be some mouse-over popup to explain the symbols without needing to open the help.

Yeah, there are a few UI/UX issues i could not solve in 1 week. If i make a post jam version i will improve that for sure.

Really great job on this game guys! I made a gameplay/tutorial video for those who are interested

Yeah, thanks a lot. Good idea with the secret end, definitely on my list now.

Wow, what a cool game! Great music and gameplay, and so many interesting new ideas in for a 7DRL. If you polymorph the Bone King on level 5, is it possible to enter an unwinnable state?

Haha yeah, might be a bad idea to try that. (Obviously this kind of stuff needs to be fixed)

Is there a reason why tiles can't be slid such that a character would be moved off the center 12 tiles? It seems strange considering that characters can move off those tiles naturally.

Although sometimes it seems like you can- if there is not already a revealed tile on that space. I am understanding this correctly?

I liked evething in this game br

One of my swap spells, rather than swap our positions, just made the enemy much longer. Other than minor bugs (which are to be expected from a gamejam game) this is so much fun

Thanks, glad you like it despite the bug(s)! :D

I hope you develop this into a full game

Hey Gek, we'll see. It's a fun concept, but i have so many other things on my list right now.

Fun game!  I liked blending moving the gameboard or the catwizard, or moving the gameboard to move the skellies.  I think kept accidentally using polymorph on the lowest level enemies and they would keep turning into the heavy armour skellies :x  Really well polished, I couldn't get to level 5 in the 30 minutes I have free now but I will come back to this one!
Thanks!

Nice, thanks for playing! 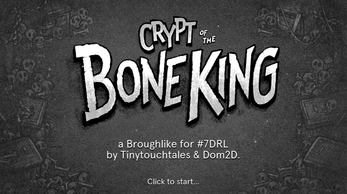