Alchemist is a solitaire style potion brewing game played with a deck of cards.

Goal of the game is to create potions for Adventurers by mixing ingredient cards. Potions need to have a minimum value of 1. Each potion has one required and one favored ingredient. The required one displayed in the Bubble on the left has to be in the potion, the favored one is a bonus that doubles each card of this type at the end of the turn.

Drag and drop 4 cards into the play area forming one turn/potion. Cards can be positioned freely (left, right, or in-between two played cards). Above the play area each turn an Adventurer is displayed. To brew the needed Potion, at least one ingredient of the required type needs to be within the 4 played cards. The favored card type gets it value double at the end of the turn. You can skip an Adventurer and send him to the end of the line (not two times in a row).

Based on the modifiers (little arrow icons) card values can be increased by combining the right cards.

There are 3 types of modifiers:

"in" (pointing inwards to the card),

"out" (pointing outwards to other cards) and

"all“ (single symbol in the middle).

An in-arrow means that the played card will get the value of it's neighbor card (types indicated on the arrow need to match).

An out-arrow means that the played card will give it's value to the adjacent card(s).

A single symbol in the lower-mid of the card (all) means that this card will get the values from all cards of the matching type in the play area independent of their position. A special case is the skull all-type which means that this card will give it's value to all skull cards independent of position. The modifiers are semi-randomly picked each game. There are no fixed cards.

You can gain an extra "Recipes-Bonus“ for a turn/potion by ordering cards in several patterns.The points count towards the total points of a potion. If your recipe is made out of favored card types it's points are doubled too. 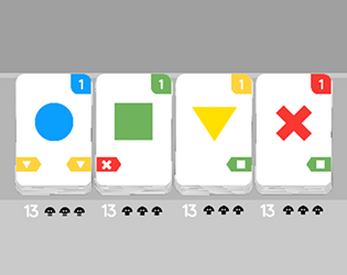